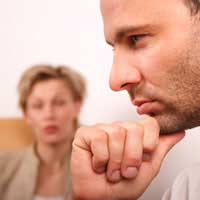 About half of all marriages end in divorce, that much we know. So walking down the aisle is a bit like rolling the dice – it may lead to the coveted “happily ever after” or it may wind up with two people battling over kids and personal property. Most people expect, though, that if they’ve made it past those first few years of adjustment, they will probably stay married forever. Unfortunately, that’s not always the case; many people are stunned in midlife to realise that their once solid marriages are ending, leaving them in emotional turmoil.

When Your Spouse Seeks a Divorce

All marriages have their ups and downs, but few people relish the idea of ending their marriage. Hearing the words, ”I want a divorce” can be troubling in a number of ways. Often the first reactions are fear and anger. Having arranged your life around the idea of aging with someone by your side can make the thought of going it alone seem quite frightening.

Suddenly, all of the plans that you’ve made must be reconsidered and in midlife, when many people are comfortably settled into their routines, such a requirement is sure to be unsettling. Anger is common, too. Many midlife divorces come after many years of marriage, leaving the partner who didn’t initiate the divorce feeling as though they are being unjustly abandoned after dedicating much of their lives to the relationship. While these feelings are perfectly natural, it’s important that they be managed since the first step to rebuilding a life is to let go of bitterness and begin to envision a different path.

When You Want a Divorce

Sometimes, people who had much in common in their earlier years grow apart as they reach midlife. Reassessing your life is common in middle age, and many people find that they begin to see themselves and their goals differently as they age. Unfortunately, implementing these changes can sometimes mean letting go of stale relationships in the hope of building a happier, more fulfilling life.

Couples with children may be at the highest risk for divorces in midlife, especially if the couple has focused so much of their attention on the children as to leave very little for nurturing the marriage. Sadly, some couples find that once their children are at an independent age, the once happy pair are all but strangers to one another, leaving one or both of them questioning the future of the marriage.

Choosing to end a marriage is serious and such a decision should not be arrived at without a great deal of consideration. It’s important to remember that marriage, like individual people, changes throughout its life, sometimes feeling gentle and easy, but can occasionally be awkward and uncomfortable. Also, looking back at the beginning of a marriage and focusing on the best assets of a partner may help a discontented spouse to realise that their marriage needn’t be tossed aside, but may simply need a bit of attention.

If this isn’t the case, however, and one feels strongly that they must leave their marriage in order to be happy, it’s important to make every effort to leave the other person with their pride, dignity, and self esteem. Divorce lawyers can help both parties to divide assets and settle on child custody arrangements, but it’s best if couples make every attempt to deal with one another in a decent and civil manner. This was once a partnership of love, after all.

When two people divorce, there are almost always others who are affected, too. Children, whether grown or still at home, often feel stung when their parents go their separate ways, so parents need to do all they can to speak respectfully of the relationship. This isn’t always easy, of course, since in most cases, one (or both) spouse is likely to feel betrayed.

The issues that led to the divorce are personal, though, and unless there is some reason that they be revealed to the children, it is better to let them draw their own conclusions and avoid expecting them to “take sides” with one parent or another. Kids have the right to close, loving relationships with both of their parents, no matter what has happened in the marriage.

In long-term marriages, as in the case in many midlife divorces, the couple is likely to share a number of friends and casual acquaintances, many of whom may feel torn in their loyalties once a couple dissolves their marriage. Frequently, the friends naturally fall to one side or another and some friends are able to maintain friendships with both people, but oftentimes, a divorce causes at least some short-term awkwardness amongst old friends, especially those who were accustomed to socialising with both spouses together.

The best way to avoid putting friends in the middle is to refrain from talking negatively about an ex spouse to mutual friends. Again, this can be difficult, but is sometimes necessary.

Healing After a Midlife Divorce

An unexpected divorce is sure to cause an upheaval of emotion, but middle aged people still have a lot of life left and it makes no sense to waste any of it by being bitter. Most people feel the need to talk about their feelings, and good friends (those that are not shared by an ex spouse) often provide the emotional (and sometimes practical) support that is needed for healing. Having someone to boost a bruised ego and help to formulate a plan for rebuilding a happy life can be enormously helpful, especially since divorce can often spark a sense of grieving, not unlike that felt after the death of a loved one. For those who do not wish to confide in friends, short term counselling may be helpful.

Keeping Your Relationship or Marriage Strong in Midlife