Home > Physical > Tips For Speeding Up a Sluggish Metabolism in Midlife

Tips For Speeding Up a Sluggish Metabolism in Midlife 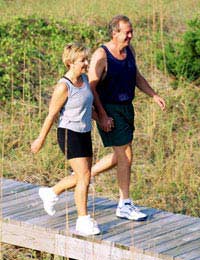 Many people find that as they approach middle age, they gain weight, but with proper diet and exercise, speeding up a sluggish metabolism can result in much desired weight loss. It's not uncommon for the pressures of daily life to become so consuming as to have those in midlife ignoring all that they know about fitness and sound nutrition, yet these are exactly the keys to avoiding midlife weight gain.

As they age, many people notice the number on the scale creeping up a bit, even if they've never had problems with weight control in the past. Baffled (and probably annoyed) by this change, they may not understand that a slowing metabolism is a natural part of aging.

Typically, metabolism slows by about 5% every ten years in adulthood. So even though they may be eating and exercising exactly the same, a 35 year old is likely to burn about 100 calories less each day than a 25 year old. By 45, the calorie difference is about 200. Fortunately, by making a few simple lifestyle changes, maintaining a healthy weight is possible in midlife and beyond.

Aerobic exercise burns fat and strength training builds muscle. It would be nice to believe that there is some magic pill that can take off fat and build muscle, but in truth, it requires some effort. Most people look to the scale to see how they are doing, but in reality, the scale only tells half of the story.

A better determining factor is body fat percentage. Medical professionals and good fitness centres can provide clients with body fat assessments, which are the best indicators of metabolic calorie burning abilities. Many in midlife are at about 40%, which is at least ten percentage points higher than they should be.

So, the question remains: how do you reduce existing fat tissue and build lean muscle? The answer is simple; make time for both cardio and strength training exercise, most days of the week. Ideally, cardio workouts of no less than 30 minutes in duration should be scheduled at least every other day, with 20-30 minute weight training sessions on alternate days. Also, workouts should be varied now and then, not only to alleviate boredom, but also to provide the body with new challenges, keeping it healthy and lean.

Crash diets are not healthy, and often, they actually lead to weight gain in the long term. When caloric intake is severely limited, the body goes into starvation mode and as a means of self-preservation, the metabolism slows. Plus, if less than 900 calories are being consumed daily, the body begins to burn muscle tissue as well as fat, slowing the metabolism even further.

Most experts recommend consuming between 1200 and 1500 calories for safe, steady weight loss. Of course, those calories must be used on healthy choices, including plenty of lean protein to build and maintain muscle mass. Studies indicate that fat free milk can be especially beneficial. Drinking two cups of skim milk shortly after working out can help to build muscle and lose fat!

Finally, stress. Middle age can be stressful for many people. Obligations to career and family may be considerable, leaving many people feeling overwhelmed, out of sorts, and ripe for a midlife crisis. When stress levels are high, the body responds by producing cortisol, which increases cravings for high fat, high carbohydrate foods. Add sleep deprivation to that, and the cravings intensify.

Seven or more hours of sleep is considered optimal, and getting less than that can really take its toll of the waistline. Those who get an average of six hours are 12% more likely to gain weight, while those who get only five hours are 32% more likely. Clearly, reducing stress and getting to bed at a reasonable hour are important tools for maintaining a healthy weight during middle age.

Midlife is often about taking care of everyone. Kids may not yet be grown and if they are, they may still need a bit of help from Mum and Dad. Aging parents often count on their middle aged children for assistance, and for many people, midlife also represents their top earning years, putting career responsibilities near the top of the list. Unfortunately, it is not uncommon for those in midlife to focus their energies on caring for everyone but themselves.

Such generosity can have a detrimental affect on both immediate and long term health, however, so it's important for middle aged people to see that their own needs for nutritious foods, ample exercise, relaxation, and restful sleep are met. In order to take care of everyone else, one must keep healthy by first taking care of themselves.

Sensible Exercise Options for MidLife and Beyond

Maintaining Health & Fitness in Your 60s

Maintaining Health & Fitness in Your 50s