Home > Legal > Middle Age: The Importance of Having a Will

Middle Age: The Importance of Having a Will 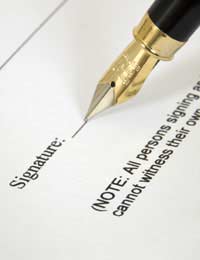 In middle age, the importance of having a will in place cannot be underestimated; it is the only way to assure that assets will be dispersed properly in the event of a death. Legal documents such as wills can be drawn up by lawyers specialising in estate law, or can be done using one of the readily available do-it-yourself (DIY) kits.

Few people expect to die in midlife, but the fact is that some of us are not fortunate enough to live in to old age. While it may be an unpleasant task, writing a will is a necessary and responsible thing to do in order to see that assets are allocated in a manner that is in compliance with one’s wishes. Sometimes, death comes quickly and unexpectedly, and if a will is not in place, the law will determine how to best divide their estate.

Even when death is anticipated, the knowledge that time is limited can make it difficult to think clearly and focus on the legal details. It’s a good practice for all adults to prepare wills – once the task is completed, it can be set aside and left to rest… unless, of course, life changes necessitate updating it.

Sometimes, wills are written and then circumstances change, making the document outdated. If someone has a change of heart and wishes to add or remove a beneficiary, the will must reflect those sentiments so that their estate will be divided according to their most current wishes.

It’s important to keep in mind that if preferences aren’t clearly stated in the will, there is no guarantee that they will be honoured. There are three major life changes that require people to amend or rewrite their wills, al of which can happen in middle age.

Details to be Included in a Will

A basic will is certain to cover major assets, but some people have strong feelings about the distribution of their personal possessions, as well. In cases where all of an estate is left to just one person, no conflict should arise, but oftentimes, funds and property are divided amongst several people. Items of sentimental value may cause discord amongst survivors if any particular item(s) are wanted by more than one person.

These types of disagreements can be avoided by specifying the recipients of family heirlooms and others personal items in advance. Charitable donations should also be designated wills, if an estate owner wishes to leave a bequest to a favoured cause.

Dying without a Will

People who do not make wills do so for a variety of reasons. Some find it difficult to consider their demise, so they put off preparing wills. Others may simply feel that since they are not especially wealthy, there is no need for a will, but that is a misconception. Wills are not only for the well-to-do; they are of value to every adult who has an estate of any value or people that they need to look out for. In other words, they are important for all of us.