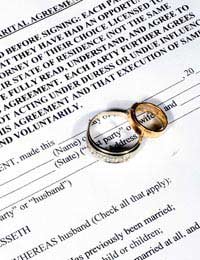 Marriage in midlife is not at all uncommon. Some people are remarrying after divorce or the death of a spouse, while some waited until they were older and better established before feeling ready for marriage.

Unlike marriage in early adulthood when most people have yet to accumulate any notable assets, those who decide to wed in midlife may have substantial funds and property that they wish to protect in the event that the marriage fails. Prenuptial agreements are designed to spell out the financial terms of a divorce, should the couple someday decide to go their separate ways.

Yours, Mine, and Ours

Long before they walk down the aisle, couples should discuss their finances. While it may not be the most romantic of topics, money can be a source of great stress in many relationships and it's best to be up front about income, assets, existing debt, and even attitudes about saving vs. spending. Going into a marriage with secrets about money is sure to come back to haunt the relationship at some point. It needs to be put out on the table.

Once both parties are clear about the other's financial profile, the real discussion can begin. One or both people may have concerns about protecting their personal assets if the marriage ends in divorce. Realism is needed here; it's not that the couple believes that they will someday part ways, but about half of all marriages fail and it's a good bet that very few divorced couples anticipated their marriages ending when they said their vows.

For many in midlife, protecting their children's financial security is of paramount concern when working out the details of their prenuptial agreements. Whether their kids are still young or out on their own, many people have plans to set aside some portion of their assets for their children. Spelling out the specifics in a prenup is the only sure way to see that the funds allocated to the care and support of children remains safely under the control of the parent, should the couple divorce.

In addition to protecting the children, prenuptial agreements can see that each spouse can hold onto the assets and property that they had when they entered the marriage, with a fair division of any assets acquired during the life of the marriage. In other words, most prenuptial agreements have both parties agreeing that if they divorce, they'll each leave with what was originally theirs and they'll split anything they made while they were together.

If both people are essentially financial equals, this is usually considered fair; if one spouse is far wealthier then the other, the terms may be a bit different.Typically, in couples who have a large variance in personal wealth, the more affluent partner agrees to give a set amount of money and/or property to the less wealthy spouse if they divorce, with specific stipulations covering the length of the marriage and the reasons for the divorce.

When prenuptial agreements first came into fashion, many people shunned them as being only for the very wealthy, but now, people at all income levels are gaining an understanding of their value. Initially, it may seem wrong to even consider the possible end of a marriage even before it has begun, but rather than being a romance killer, setting up prenuptial agreements can help couples to stay focused on their relationship. When financial worries are put aside, two people in love can direct their attention toward the really important things - like planning the honeymoon!

Struggling With Finances During Midlife